What Are the Best-Selling Weed Seeds in the USA?

Probably, you are also wondering which cannabis strain is the best in the USA. After all, this is one of the most common questions not only for novice growers but also for professional breeders. Based on the information provided by popular seed aggregators, we have compiled the rating of the most popular strains in the US market. However, there is also no right answer to this question, because marijuana is an individual experience. Whatever the variety of cannabis you smoke, some will like it and others will not.

The effect of cannabis will always remain subjective, and the popularity of a variety depends not so much on the number of psychoactive cannabinoids, but on its influence on culture and people’s minds. So, here are at least 10 varieties to consider if you get seeds with a discount on theseedfair:

OG Kush is a Californian legend, which first appeared in Florida but gained popularity in Los Angeles. The variety has a complex mixture of sour, and citrus aromas and flavors due to its terpene profile: myrcene, limonene, and caryophyllene. Its flavors are well known, but this is actually the effect that made OG Kush really famous. OG Kush is an original hybrid with powerful, heavy, and long-lasting effects that will leave you super relaxed, but not completely stuck on the couch. Many of the strains we love today are from Kush: for example, Kosher Kush, Triangle Kush, and SFV OG.

Recently, Seth Rogen confirmed that the Pineapple Express variety didn’t exist until they made the movie of the same name. Currently, Pineapple Express comes up with many options with all kinds of genetics. The most famous variation from G13 Labs is a cross of Trainwreck and Hawaiian to produce marijuana with citrus and tropical flavors backed by the power of Kush. This variety will lift your mind over your body, and provide a very euphoric effect.

AK-47 is one of those super popular strains whose origins are shrouded in mystery. The AK-47 is believed to be a mixture of Colombian, Mexican, Thai, and Afghan genetics. Nothing is known about it, except that the buds are usually dense and covered with orange hairs. Regardless of where or how the AK-47 appeared, its effect is known for being strong, long-lasting, and mentally stimulating.

Blue Dream is one of the most famous cannabis strains in the world. There are various genetics and varieties of this plant, and it is not clear which one is the true BD. But most of us know Blue Dream as a cross of Haze and Blueberry. Blue Dream lovers appreciate its sweet taste and mood-enhancing effects, making it the ultimate cannabis. This strain is so famous for its mood-enhancing effects that it has quickly become mainstream.

Gelato came out of nowhere and entered the game many years ago. Many especially love this variety for its unusual taste and aroma, and this is not surprising because Gelato was named after the dessert. Some varieties smell like grapes, others smell like berries, others have an earthy aroma, and some are just sweet and floral. No matter how your Gelato smells, its powerful effects will surprise you. Most people use Gelato at the end of the day because of its ability to keep you couch-bound for hours.

Purple Haze is a cannabis variety known even to non-smokers, thanks to the Jimi Hendrix song of the same name and the psychedelic culture of the 60s. Fortunately, this plant has such huge flowers that it deserves to be famous for its influence on cannabis culture.

Sour Diesel, also known on the East Coast as Sour D or Sour Dies, is another strain that has outgrown the cannabis industry and is now famous in pop culture. The name of the variety appeared due to its sour citrus taste. Diesel begins to emit aroma when the inflorescence is compressed. There are so many varieties of Sour Diesel on the market right now that it’s just impossible to tell if what you’re buying is the true Sour. In terms of effects, people are looking for Sour Diesel to help them stay active during the day. Many say it is energizing and helps to focus, but others find it calming and relaxing. 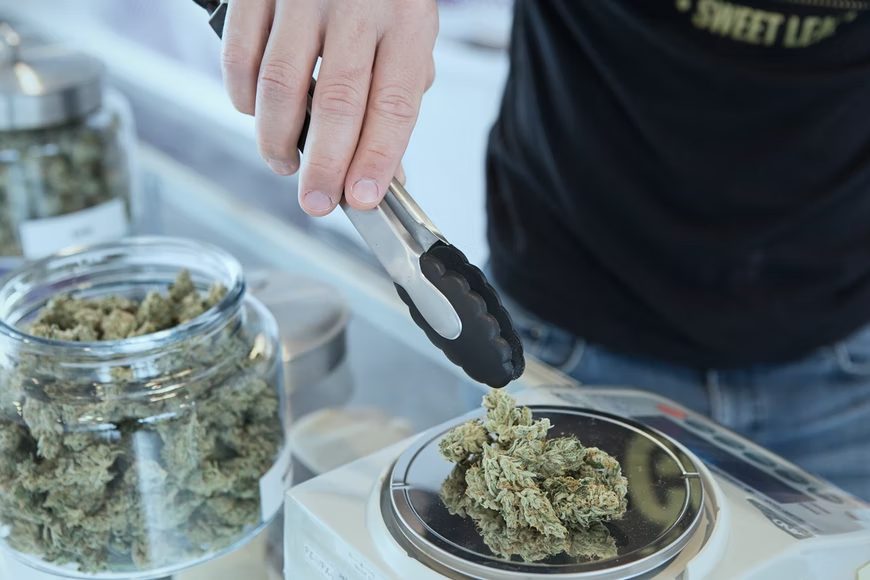 Wedding Cake is one of the most popular varieties of the 21st century. It got its name from its sweet taste and long aftertaste, similar to what is left after a good piece of vanilla cake. The strong aroma disappears when smoked, and the taste begins to give more floral notes than a sweet glaze. Wedding Cake is a high THC variety. The effects appear slowly, starting from the head, and then gradually spreading throughout the body.

Kush Mints is new to the world of strains, so little information is available about it. All that is known about Kush Mints is that it was created by Seed Junk, who also gave us Wedding Cake. Kush Mints are said to have a strong mint flavor and a relaxing and calming effect on the body.

Forbidden Fruit is one of the most delicious varieties. It combines tropical, berry, and fruit flavors so smoking it is like smoking Skittles. Forbidden Fruit was created by crossing Tangie and Cherry Pie, and if you can find it as a concentrate, be sure to use this opportunity for one of the most terpene experiences in the cannabis universe. The aromas of this strain are simply the best.

Types Of Edibles: The Ultimate Guide to Cannabis Edibles