I tried Galaxy Treats for the first time recently and was really impressed! The HHC disposables are great for on-the-go use, and the Moon Babies Gummies are a perfectly sweet treat that’ll mellow you out for the rest of the day. Their Delta-8 products are also top-notch; I’m really impressed with the quality. Overall, I would highly recommend Galaxy Treats to anyone looking for top-quality products and a great experience!

The Galaxy Treats mission is to “offer adults a delicious, high-quality, and enjoyable way to relax, unwind, and chill with our 100% hemp-derived products, which are available in a wide variety of flavors and cannabinoids.” All of their products are 100% hemp-derived, 3rd party lab tested, and made in the USA! I personally loved every single product I tried, but if you don’t believe me, check out all the 5-star reviews on their website! I’m really excited to share this review today; this has to be one of my favorite brands I’ve reviewed this year. 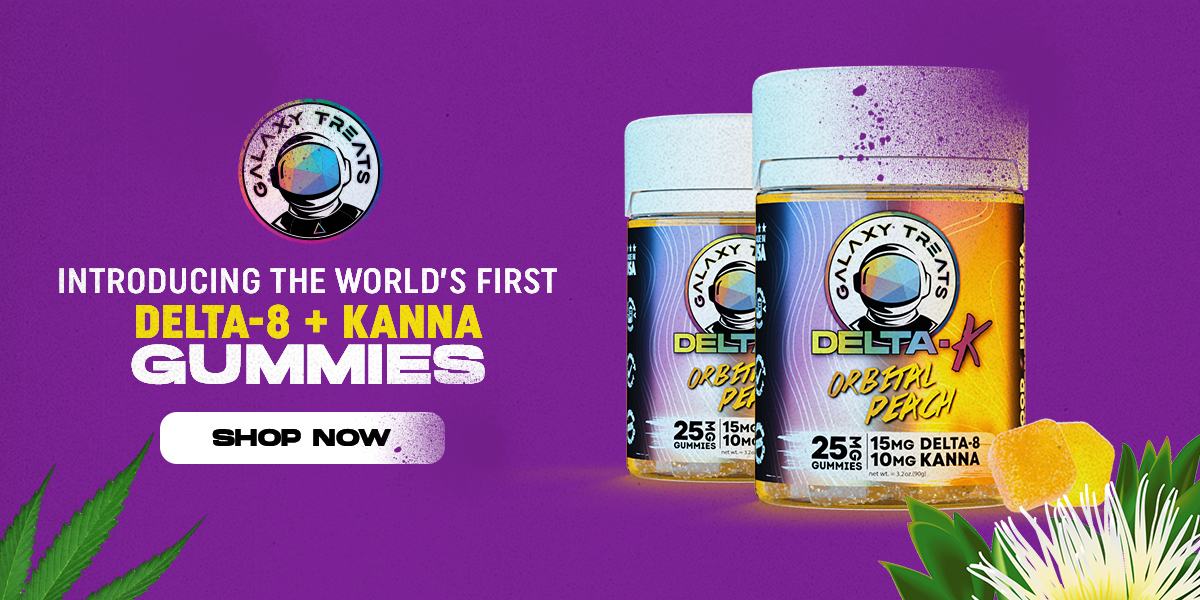 Even though THC-O is still a fairly rare cannabinoid, cannabis users are becoming more and more interested in it. Those who have tried THC-O report that it produces a more cerebral, psychedelic high than, say, Delta-8 THC. THC-O also takes time to process in the body before its effects are fully felt, much like when edibles are consumed. As of now, you’ll mostly see THC-O in the form of vape cartridges, edibles, and tinctures. Even though this compound could be interesting to anyone, it seems to be most interesting to people who live in US states where recreational marijuana use is still illegal. 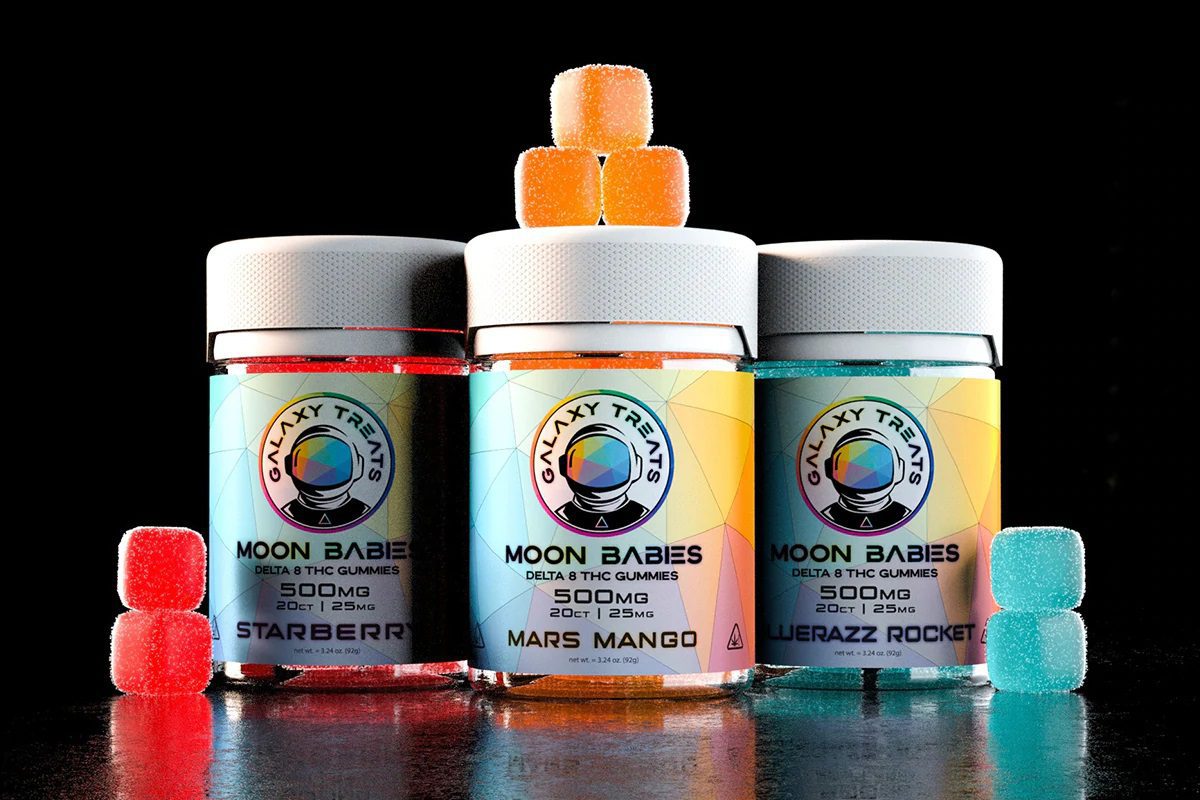 One of the most popular products Galaxy Treats has to offer has to be their Moon Babies! These gummies come in a wide variety of flavors, as well as different cannabinoids. Whether you’re looking for Delta 8, THC-O, HHC, or even Delta K, we’re sure you can find the perfect Moon Babies for you.

Let’s start with the THC-O gummies. I will be honest: I have a really low tolerance, and these were a trip! I really liked how these Moon Babies made me feel almost psychedelic, but next time I might try a lower dose. I decided to go for a full PeachBerry gummy and all I can say is I’m glad I had the day off. Again, I do have a notoriously low tolerance, but I felt as if these were some of the more hard-hitting gummies that I’ve reviewed. They also taste delicious! I only tried the peach-berry flavor, but the Citrus Melon Comet gummies are definitely next on my list. 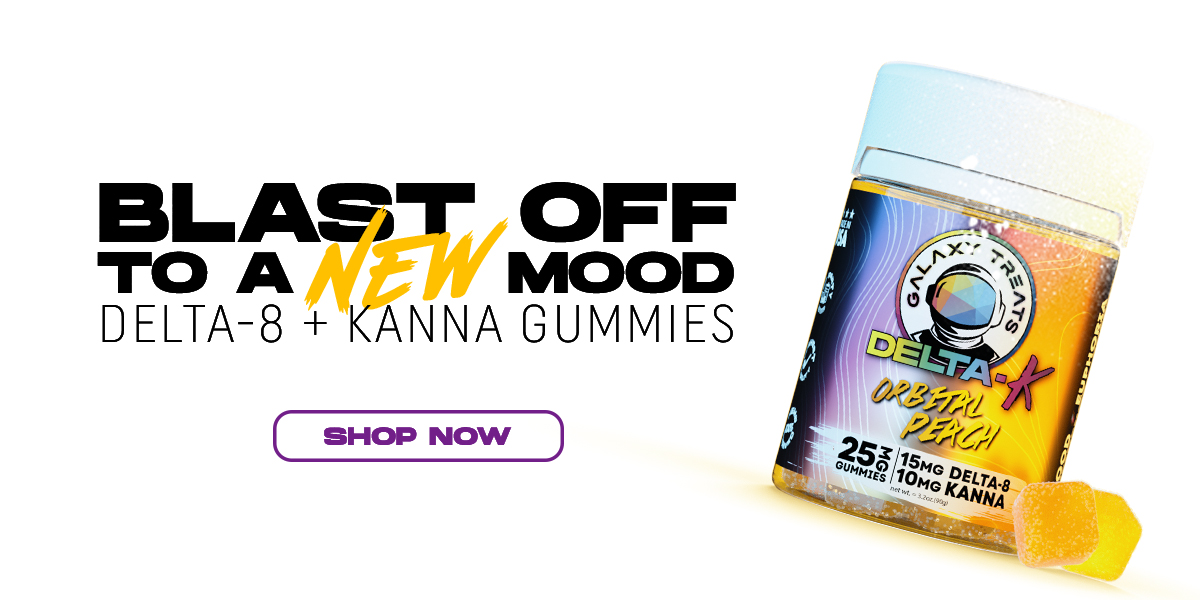 I know you’re probably wondering right now what Delta K even is. Delta K is the combination of Delta 8 and something called Kanna! I’ll get into that deeper later in the article, but Kanna is derived from a plant that’s been used medicinally for ages and is considered to have mood-boosting properties. I was really excited to try these Delta K Moon Babies; they were a bit more relaxing and euphoric compared to the THC-O ones. Rather than being psychedelic and intensely mental, this high was pretty grounding and seemed to enhance my reality rather than shoot me into a new one. Like all of the other Galaxy Treats products, the Orbital Peach flavor was quite delicious. 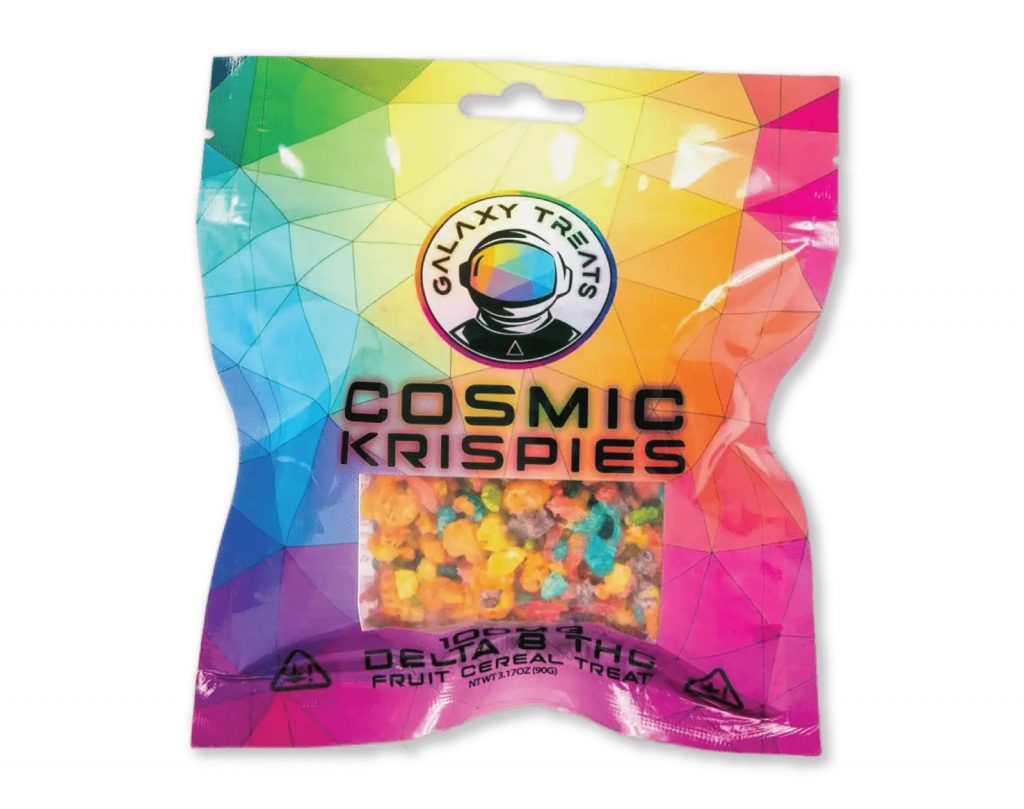 Last but not least are the Cosmic Krispies. Each Krispy contains 100 mg Delta-8 THC and is made with delicious fruit cereal! I thought these were extremely tasty, and they lasted me quite a while; it was so good that I actively had to stop myself from eating the entire thing in one sitting. The Cosmic Krispy made me feel very mellow and relaxed, and after about two hours, I felt like I was lying under my favorite weighted blanket. I would highly recommend these, and I will be getting more for myself in the future!

Galaxy Treats has a large section of HHC products, but before we start, what exactly is this compound? The answer to this question is a bit tricky, given how there hasn’t been a ton of research into this cannabinoid as of now. HHC is a compound found in cannabis, and although it isn’t a part of the THC grouping of cannabinoids, it produces similar effects. According to those who have used the compound, it falls somewhere between Delta-8 THC and THC-O in terms of effects. 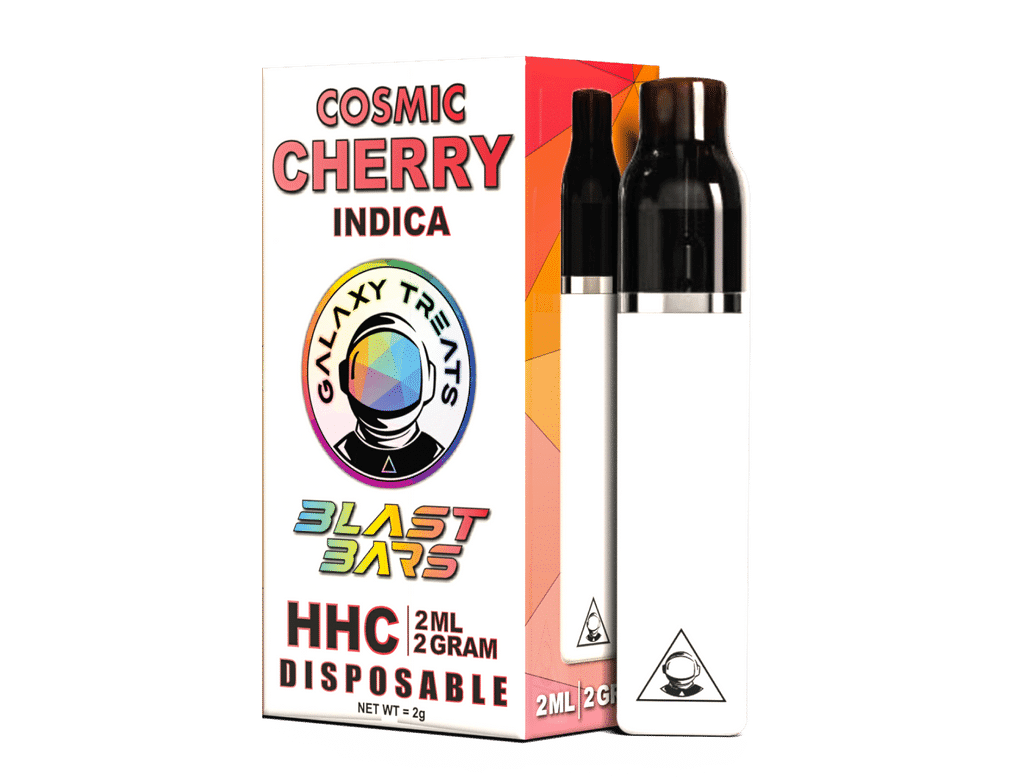 I was a huge fan of these 2 gram HHC disposables! Each flavor I tried was delicious, and the effects were perfectly balanced to my liking. These disposables come in four different flavors: Cosmic Cherry, Galactic Grape, Lunar Lemon, and Planet Blue! I would have to say Cosmic Cherry was my personal favorite, but I’m also biased towards indica strains for their heavier hitting and more calming effects.

I love how each disposable is 2 grams; they’re very reasonably priced and will also last you longer than other disposables on the market! It felt very similar to other Delta 8 products I’ve tried, but I didn’t experience any negative side effects from these products like I have in the past. I have a tendency to get pretty anxious, but these HHC disposables gave me a perfect blend of relaxation and euphoria: anxiety-free!

HHC and Delta-8 THC are both small amounts of cannabinoids that make people feel high. Minor cannabinoid compounds refer to compounds that collectively make up less than 1% of the cannabinoid profile of the cannabis plant; all types of cannabis plants contain them. Similar effects and advantages of HHC and Delta-8 include sedation, vitality, and sleep promotion. HHC, however, has a distinctly higher potency than delta-8. While delta-8 is nearly half as potent as THC (marijuana), HHC is roughly 70–80% stronger.

What Is Delta K?

I went into this briefly when talking about the Orbital Peach MoonBabies, but what exactly is Delta K? Delta K is the combination of Delta-8 THC and Kanna, which come from a plant called Sceletium tortuosum. This plant is native to South Africa. It has been used as medicine for a long time, mostly as a psychotropic, which is a substance that changes the way a person thinks or feels. Kanna has shown evidence of being able to affect one’s mood and help lessen the severity of depression and anxiety. When combined with Delta-8, there’s a really positive synergy there that allows for a bit more euphoria than Delta-8 generally provides alone.

13 States That Could Legalize Cannabis in 2023

Anticipating the Ebbs and Flows of Seasonal Retail Cannabis Sales

‘Absolutely Worth It:’ Inside Mississippi’s Medical Cannabis Sales Launch

Study Finds THC-O Acetate Could Cause Another EVALI Outbreak