Like any other natural product, the biomass of legal cannabis can be contaminated by several toxic agents such as heavy metals, organic solvents, microbes and pesticides, which significantly influence the safety of the end products.

Let’s just consider the toxicological effects. Since cannabis products are not only administered in edible forms but also smoked and inhaled, unlike most agricultural products, pesticide residue poses an unpredictable risk to consumers. One example is the potential role of myclobutanil in the vape crisis.

Unfortunately, federal and state laws are still conflicted on cannabis-related pesticides. Currently, only ten pesticide products have been registered specifically for hemp by the U.S. Environmental Protection Agency. So, the question arises what has to be done with all pf the high-value, but also contaminated cannabis, keeping in mind that during the extraction processes, not only the phytocannabinoids get concentrated but the pesticides as well, reaching concentrations up to tens or hundreds of parts per million!

Currently, there are three different sets of rules in place in the regulatory areas of Oregon, California and Canada. These regulations detail which pesticides need to be monitored and remediated if a certain limit for each is reached. Because the most extensive and strict regulations are found in Canada, RotaChrom used its regulations as reference in their case study.

To illustrate that reality sometimes goes beyond our imagination, we evaluated the testing results of a THC distillate sample of one of our clients. This sample contained 9 (!) pesticides, of which six levels exceeded the corresponding action limits. The most frightening, however, regarding this sample, is that it contained a huge amount of carbofuran, a category I substance. It is better not to think of the potential toxicological hazard of this material…

The CPC-based purification of CBD is a well-known and straightforward methodology. As the elution profile on the CPC chromatogram of a distillate shows, major and minor cannabinoids can be easily separated from CBD. At RotaChrom, this method has been implemented at industrial-scale in a cost effective and high throughput fashion. In any case, the question arises: where are the pesticides on this chromatogram? To answer this, we set ourselves the goal to fully characterize the pesticide removing capability of our methodologies.

Our results on this topic received an award at the prestigious PREP Conference in 2019. The ease of pesticides removal depends on the desired Compound of Interest.

Here is a quick recap on key functionalities of the partition chromatography.

Let’s get into the chemistry a bit:

The partition coefficient is the ratio of concentrations of a compound in a mixture of two immiscible solvents at equilibrium. This ratio is therefore a comparison of the solubilities of the solute in these two liquid phases.

The CPC chromatogram demonstrates the separation of Compounds of Interest based on their unique partition coefficients achieved through a centrifugal partition chromatography system.

CPC can be effectively used for pesticide removal. About 78% of the pesticides around CBD are very easy to remove, which you can see here:

In this illustration, pesticides are in ascending order of Kd from left to right. CBD, marked with blue, elutes in the middle of the chromatogram. The chart illustrates that most polar and most apolar pesticides were easily removed beside CBD. However, some compounds were in coelution with CBD (denoted as “problematic”), and some compounds showed irregular Kd-retention behavior (denoted as “outliers”).

If pesticides need to be removed as part of THC purification, then the pesticides that were problematic around CBD would be easier to remove and some of the easy ones would become problematic.

To simulate real-world production scenarios, an overloading study with CBD was performed, which you can see in the graph: 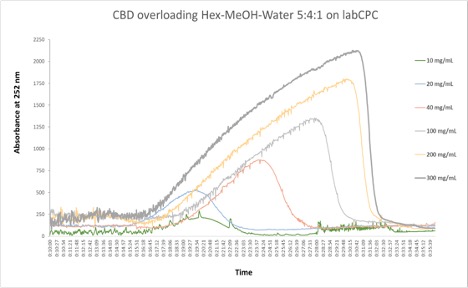 It is easy to see on the chromatogram that due to the increased concentration injected onto the rotor, the peak of CBD became fronting and the apparent retention shifted to the right. This means that pesticides with higher retention than CBD are more prone to coelution if extreme loading is applied.

To be able to eliminate problematic pesticides without changing the components of the solvent system, which is a typical industrial scenario, the so-called “sweet spot approach” was tested. The general rule of thumb for this approach is that the highest resolution of a given CPC system can be exploited if the Kd value of the target compounds fall in the range of 0.5-2.0. In our case, to get appropriate Kd values for problematic pesticides, the volume ratio of methanol and water was fine-tuned. Ascending mode was used instead of descending mode. For the polar subset of problematic pesticides, this simple modification resulted in an elution profile with significantly improved resolution, however, some coelution still remained.

Moreover, if we focus on this subset in the three relevant regulatory areas, the outcome is even more favorable. For example, myclobutanil and bifenazate, dominant in all of the three regulatory regions, are fully removable in only one run of the CPC platform.

Based on these results, a generic strategy was created. The workflow starts with a reliable and precise pesticide contamination profile of the cannabis sample, then, if it does not appear to indicate problematic impurity, the material can be purified by the baseline method. However, if coeluting pesticides are present in the input sample, there are two options. First, adjusting the fraction collection of the critical pesticide can be eliminated, however the yield will be compromised in this case. Alternatively, by fine-tuning the solvent system, a second or even a third run of the CPC can solve the problem ultimately. Let me add here, that a third approach, i.e., switching to another solvent system to gain selectivity for problematic pesticides is also feasible in some cases.

In review, RotaChrom has conducted extensive research to analyze the list of pesticides according to the most stringent Canadian requirements. We have found that pesticides can be separated from CBD by utilizing our CPC platform. Most of these pesticides are relatively easy to remove, but RotaChrom has an efficient solution for the problematic pesticides. The methods used at RotaChrom can be easily extended to other input materials and target compounds (e.g., THC, CBG).

Everything Blockchain Releases PulseChain Update from its