Lawmakers in Hawaii voted to advance two marijuana bills on Tuesday, one to legalize and regulate cannabis for adults 21 and older and another to increase the amount that is covered under the state’s existing decriminalization law.

A separate proposal to legalize psilocybin mushrooms for therapeutic use, meanwhile, is set to be heard on Friday.

Hawaii decriminalized up to three grams of marijuana—enough for a few joints—under a 2019 law that took effect last year, replacing criminal penalties with a $130 fine. This year’s bill, SB 758, would increase the possession threshold to one ounce, or about 28.5 grams.

A separate bill, SB 767, would legalize marijuana and allow licensed businesses to cultivate, produce and sell cannabis products. It would also allow adults to grow up to three mature plants for personal use.

Both measures were approved Tuesday by the Senate Committee on Public Safety, Intergovernmental and Military Affairs. The decriminalization bill passed unanimously, 5–0, while the legalization bill received a no vote from the panel’s lone Republican, Sen. Kurt Fevella. 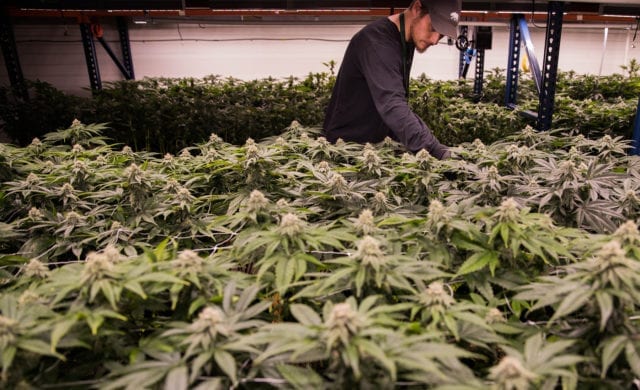 The legalization bill now proceeds to a joint hearing between the Senate Judiciary and Ways and Means committees, after which it would head to the chamber floor. The decriminalization measure goes to the Judiciary Committee. That committee is chaired by Sen. Karl Rhoads (D), who also headed the panel when it passed a different legalization proposal out of committee two years ago. The bill’s progress halted after that.

Advocates in the state are optimistic the marijuana decriminalization expansion bill can pass. They’d also like to see lawmakers amend the measure to reduce the current $130 penalty.

“An increased threshold will help minimize the impact of the state’s criminal legal system upon those who possess cannabis, which is far from an inconsequential number,” Nikos Leverenz, board president for the Drug Policy Forum of Hawaii (DPFH), told Marijuana Moment in an email. The group submitted testimony to the panel in favor of both bills.

“From 2000 to 2017 there was an average of over 1,000 cannabis possession arrests in each year in Hawaii,” Leverenz said, “with Native Hawaiians composing a plurality of that number.”

As for legalization, DPFH told lawmakers that the change could grow the state’s economy—and its tax revenue—by tens of millions of dollars. “Even a smaller state like Alaska, which has a modest adult-use cannabis sector that has been online for three years, now sees $25 million in excise tax,” the group said in written testimony, adding that legalization could also make Hawaii even more appealing to tourists.

But as the bill moves forward, DPFH and other advocates are urging lawmakers to consider adding social equity provisions to ensure participation in the new industry by those who have been impacted by cannabis prohibition and the drug war.

“Hawaii should look to set the national standard for social equity by explicitly ensuring participation by native Hawaiians in every aspect of the emerging cannabis economy,” Leverenz said after Tuesday’s vote.

Even advocates acknowledge that legalization faces a difficult path to becoming law, noting that Gov. David Ige (D) has strongly opposed cannabis reforms in the past. When the legislature passed its existing marijuana decriminalization measure, in 2019, Ige let the measure take effect without his signature. In a press conference at the time, he called the matter “a very tough call” and said he went “ back and forth” before deciding to let the bill become law. He previously vetoed separate legislation to add opioid use disorder as a medical cannabis qualifying condition.

A number of public agencies, including the state Department of Transportation, the Honolulu Department of the Prosecuting Attorney, and local police agencies submitted testimony against the legalization measure ahead of Tuesday’s hearing.

“The passage of this bill would create an increased availability of marijuana, making it more accessible, especially to juveniles,” argued Maj. Phillip Johnson of the Honolulu Police Department’s Major Narcotics and Vice Division.

The police chief for Maui, Tivoli Faaumu, said in written testimony that “this bill is not specific on how the marijuana will be tested, what levels of toxic (pesticides) compounds exist in marijuana, and the levels of THC [that] are present in the marijuana that is for sale. This is dangerous, and therefore should not be openly and publicly for sale.”

Under SB 767, the Hawaii Department of Health would be required to come up with those guidelines later this year, by July 1. The department would also craft rules around licensing, security requirements, product labeling, health and safety regulations, advertising restrictions and the prevention of marijuana sales to minors.

Driving under the influence of marijuana would remain illegal under the proposal. Employers’ abilities to restrict workers from consuming cannabis and screen them for past use would also be unaffected.

The bill would leave intact the state’s existing medical marijuana system, which allows registered patients to possess up to four ounces of cannabis.

As Washington Post reporter Dave Weigel pointed out in December, Hawaii is one of only four states, along with Delaware, New York and Rhode Island, where Democrats have legislative supermajorities but marijuana isn’t yet legal.

Later this week, Hawaii lawmakers are set to consider a measure to legalize psilocybin mushrooms for therapeutic use. The psychedelics have shown promise in end-of-life care and in treating certain mental health conditions, such as severe depression.

That bill, SB 738, is scheduled for a Friday morning hearing in the Senate Judiciary Committee. It was introduced late last month, less than a year after lawmakers introduced bills to begin studying the therapeutic use of psychedelic mushrooms with the goal of eventually legalizing them. Those measures, however, did not advance.