With tougher comparisons to a year ago in most cases, growth was generally weak across the markets covered by BDSA in May. Recall that a year ago, cannabis demand surged. In almost all of the markets covered, sales slipped sequentially from April despite one extra day (which wasn’t 4/20!), with growth from a year ago slowing as well. In this review, we will look at the markets one-by-one, beginning with the more mature Western markets and then concluding with the newer Eastern markets.

BDSA provides coverage for Arizona, California, Colorado, Nevada and Oregon. In April, growth ranged from 2.5% in Oregon to 49.9% in Nevada compared to a year ago.

Arizona transitioned to adult-use in late January, but this is the second month that BDSA included adult-use sales. Total cannabis sales grew 32% to $122.9 million, with adult-use representing $53.9 million. Medical cannabis sales fell 26% to $69 million. Sequentially, overall growth fell 1.6%, with medical falling 4% and adult-use increasing 2%. Growth was strong across all categories, but the highest growth by far was in pre-rolls, which gained 157%. 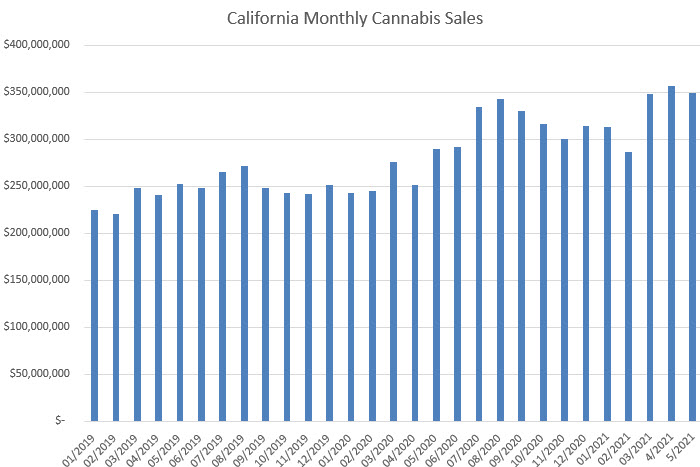 The mature market of Colorado, which has shown vigorous growth over the past year, hit a wall, with sales of $201.1 million growing only 3.8% from a year ago as they declined 0.8% from April levels. Flower declined 9%, while pre-rolls grew 32%. Ingestibles grew 32%, while concentrates expanded by 13%. 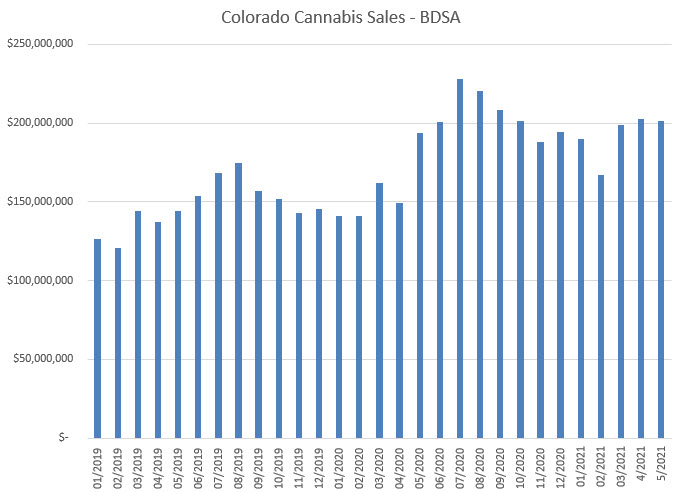 Facing a relatively easy comparison, sales in Nevada grew 49.9% to $87.4 million, slipping 0.5% from April. Next month should be better given that Las Vegas fully reopened in June. As in other states, pre-rolls led growth at 83%. 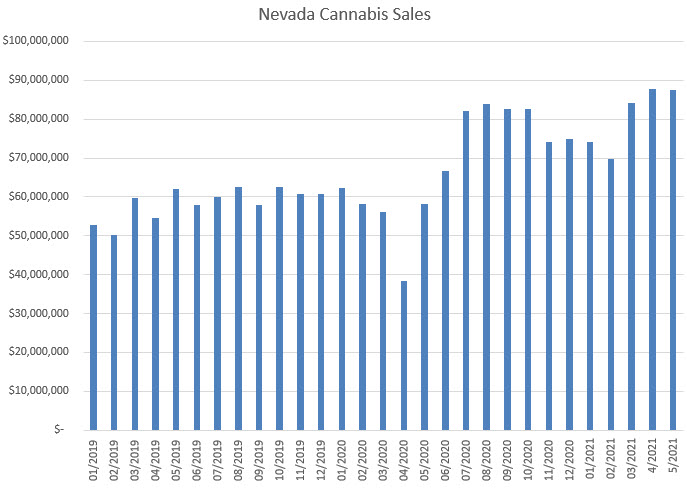 Oregon, another mature market that had explosive growth following the pandemic, hit a wall in May too, with sales growing just 2.5% to $105.6 million, down 4.4% from April. Pre-rolls were a standout, growing 27%, while ingestibles and flower decreased 4%. 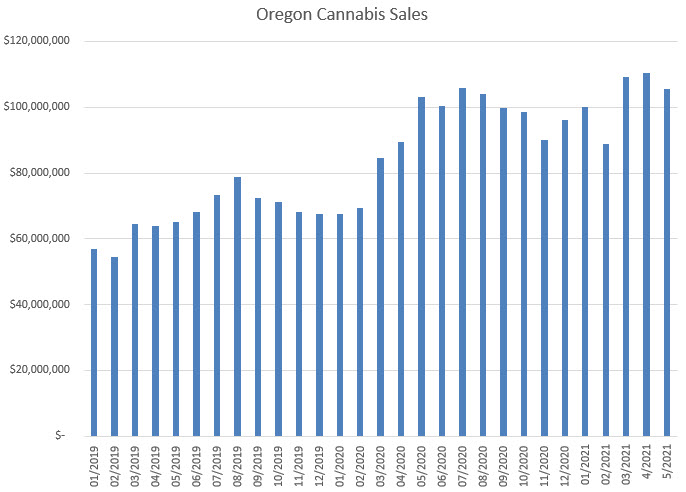 In the newer markets, the annual rate of growth declined in all markets. Note that we wrote about May data for Illinois based on the state’s data a month ago. BDSA provides more comprehensive data than the state, breaking sales down by product types. The state hasn’t yet released the data for June, but it should do so this week. Note that BDSA has begun providing data for Florida and Michigan as of January. Florida sales declined sequentially, as did sales in Michigan, which we previously detailed.

The only state to experience sequential growth across those tracked by BDSA was Illinois, which saw annual sales increase by 97.1% to $150.6 million, up 0.3% sequentially. Like other states, pre-rolls led the way, increasing 221%. Flower grew 144%, while concentrates gained 62% and ingestibles 56%. 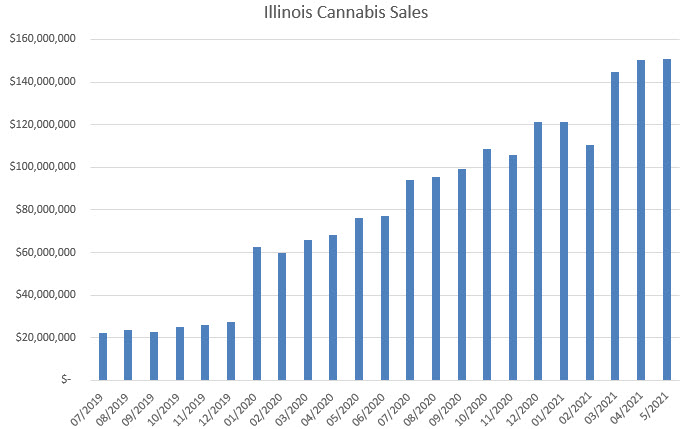 Sales declined for the second consecutive month, falling 1.9% to $46.9 million. This represented annual growth of 21.5%, about half the growth compared to the prior two months. Ingestibles grew 37%. Pre-rolls were one of the slowest categories in this state, growing just 20% and representing only 7% of overall sales. 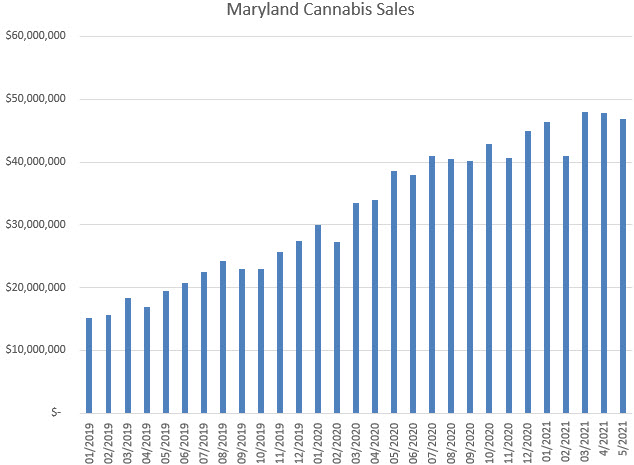 While the comparison was tougher than in April, May sales were depressed a year ago in Massachusetts due to adult-use closures for most of the month. Compared to a year ago, sales in the state expanded by 257.1% to $122.5 million, a decline of 4.9% from April. Pre-rolls grew 399%, with ingestibles growing 287%. Flower and concentrates experienced growth just below the overall growth rate. 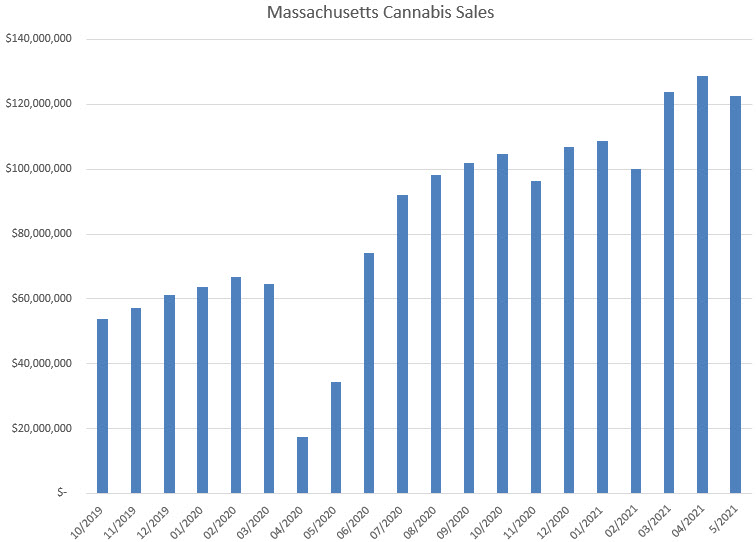 Auxly Strengthens Financial Position With the