An Update on Missouri Legalization & Taxes

Some states, like California, Colorado and Washington, have welcomed cannabis with open arms while others have taken a while to come to the party (or haven’t gotten there yet). Missouri, whose licensed sales only began in October 2020, is one of the late arrivals.

Perhaps it’s in the nature of the people of the Show Me State to wait for proof that something is a good thing rather than being early adopters. Even Missouri’s nickname came into being as a statement of skepticism when Missouri Congressman Willard Duncan Vandiver, in an 1899 speech in Philadelphia, said, “Your frothy eloquence neither convinces nor satisfies me. I am from Missouri. You have got to show me.” (Not surprisingly, perhaps, Missouri’s state animal is the Missouri Mule).

Missouri legalized the use of medical cannabis on December 6, 2018. Compared to many other states, Missouri’s definition of what constitutes medicinal use is more tightly defined. For example, most medical cannabis states allow “anxiety” as an acceptable condition for a prescription; Missouri does not.1

Current Status of Adult Use Cannabis

Missouri is now locked in a battle to legalize adult use cannabis, with the group Legal Missouri 2022, among others, working hard to put the measure on the ballot this year. At the same time, Representative Ron Hicks (R) is pushing to legalize recreational purchases with his Cannabis Freedom Act. “I want the legislature to be able to handle it so that when there are problems and things need to be changed, it can be changed,” Hicks said.2 Missouri Governor Mike Parson (R), who has been against recreational usage, has stated he would “much rather have the legislators have that discussion out here and see if there is a solution other than doing the ballot initiative.” Parson added, “If it got on the ballot, it’s probably going to pass.”3

Cannabis Business in Missouri: Only Cost of Goods Sold Deduction

Missouri has maintained its state tax code to be in conformity with Section 280E of the Internal Revenue Code, which disallows deductions and credits for expenditures connected with the illegal sale of drugs, stating:

No deduction or credit shall be allowed for any amount paid or incurred during the taxable year in carrying on any trade or business if such trade or business … consists of trafficking in controlled substances (within the meaning of schedule I and II of the Controlled Substances Act) which is prohibited by Federal law.4

This is true for both corporation5 and individuals6 in Missouri.

Tax compliance is burdensome in Missouri, with dispensaries having to file returns monthly, even when they have no tax to report.12 Missouri also doesn’t allow cannabis businesses to pay their taxes in cash.13

No Tax on Tax

It’s important to note that Missouri doesn’t charges sales tax on cannabis tax nor cannabis tax on cannabis tax (unlike high-tax states like California). Under Missouri’s law, the tax is “separate from, and in addition to, any general state and local sales and use taxes that apply to retail sales.”14 Under Missouri’s sales tax law, “ Tax collected as a part of a sale should not be included in gross receipts.”15 Missouri has not specified whether the medical tax constitutes tax collected as a part of a sale; however, its regulations state that gross receipts from the sale of cigarettes do not include the amount of the sale price that represents the state cigarette tax.16 If the medical tax is analogous to the cigarette tax, gross receipts from the sale of medical cannabis likely excludes the amount paid as medical cannabis tax.

If the Cannabis Freedom Act passes, Missouri will have a number of additional interesting changes. The bill would only allow for double the number of current medical cannabis licensees to serve the adult use market. It would also allow for people with non-violent convictions to petition the courts to have their record expunged (cleared).

The Act would allow the Department of Revenue to set an adult-use tax of up to 12%. There would be no such tax on medical cannabis sales.17

Licensed businesses would also be able to make tax deductions with the state up to the amount that they’d otherwise be eligible for under federal law if they were operating in a federally legal industry.18

In a move seen by many as a bid to derail the Cannabis Freedom Act, Representative Nick Schroer (R) amended the Act to bar transgender women from accessing no-interest loans for women- and minority-owned cannabis businesses, adding that only women who are “biologically” female would be eligible for the benefit. In the end, this addition may have the effect of scuttling the bill.19

Multiple Efforts to Place Cannabis on the Ballot

Even if the Act doesn’t pass, there are multiple efforts to place cannabis before the voters, including one by Representative Shamed Dogan (R), the group Legal Missouri 2022, which got medical cannabis passed by voters in 2018, and Fair Access Missouri.20

Oklahoma, like Missouri, has not legalized the use of recreational cannabis, only medical cannabis. Also, Oklahoma taxes sales of tangible personal property (except newspapers and periodicals) at 4.5%, which is close to Missouri’s 4%.21 Tax is imposed on gross receipts or gross proceeds.22 Gross receipts (or gross proceeds) = Total amount of consideration, whether received in cash or otherwise. Credit is allowed for returns of merchandise.23

Note, however, that Oklahoma has made it explicit that there is no tax-on-tax. “The 7% gross receipts tax is not part of the gross receipts for purposes of calculating the sales tax due, if the tax is shown separately from the price of the medical marijuana.”25

Although Missouri only began licensed sales in October 2020, the state’s monthly sales has shown a strong upward curve. By the end of June 2021, monthly sales were just above $16 million. That number had shot up to $29 million per month for December 2021, and almost $37 million for April 2022.27 Patient enrollment is also increasing significantly.28 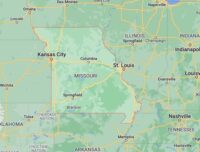 The best move, many experts believe, is to get into the medical market now, before the inevitable happens and adult use is approved. Competition is low at the moment, due to the lack of medical licensed dispensaries in the state. Although obtaining a license can be difficult, the current lack of competition, as well as the opportunity to gain a foothold in the cannabis industry before recreational purchases are approved, could provide a 10 times revenue increase from current medicinal sales levels.

Tyler Williams, founder of St. Louis-based Cannabis Safety and Quality and one of the St. Louis Business Journal’s 2021 40 Under 40, is optimistic about the future of Missouri cannabis. The state, he says, has been left “with only a few cannabis growers and manufacturers with a head start over the impending recreational market that is likely to come within the next couple of years.”29

The State of Missouri’s treatment of legal cannabis has been mixed, but the demand for the product by many residents of the state is unquestioned. If an entrepreneur has the foresight to get involved before all the wrinkles of legalization have been resolved, there is a possibility for very strong return on investment.

Getting Started With Wholesale Delta 8 THC

Our Plain Jane CBD Review for 2022

Our Delta Effex Review for 2022

Getting Started With Wholesale Delta 8 THC