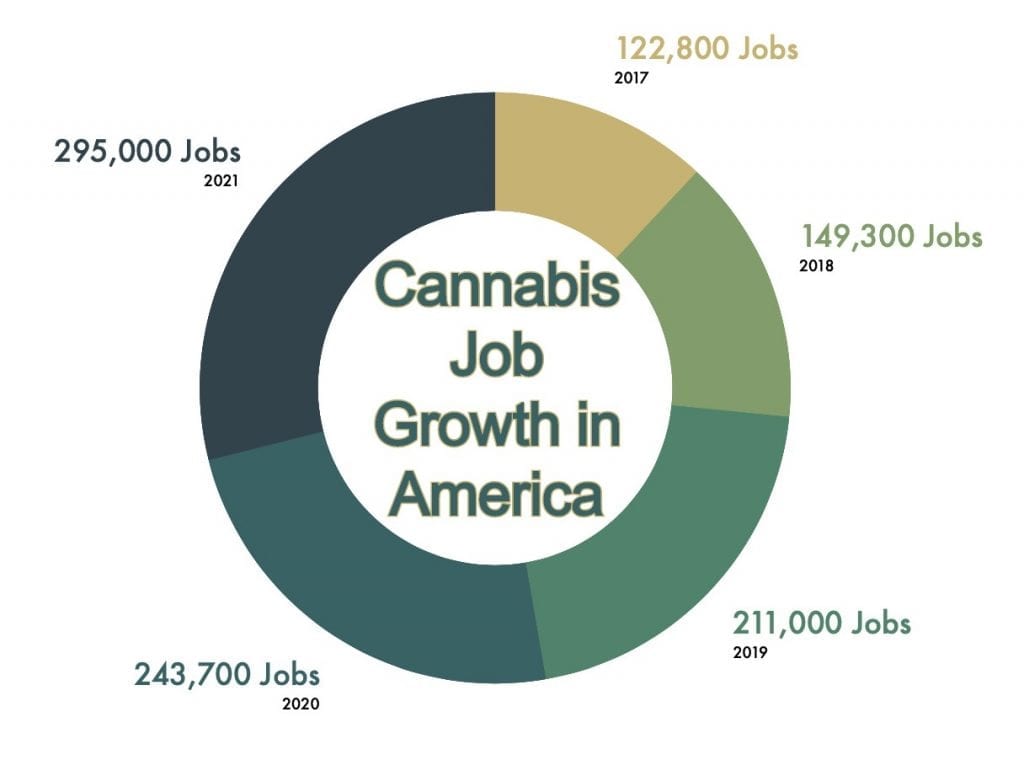 In four years, the cannabis industry’s job growth has increased 161%, quickly beating predictions from other industries 10 years from now.

Cannabis jobs aren’t accurately reported to the Department of Labor because it’s federally illegal, so in partnership with Whitney Economics, Leafly has been filling that gap since 2017! The result is a goldmine of knowledge, and always filled with incredible cannabis job data.

The 2021 report found that there are more legal cannabis industry employees in the United States than:

The United States added 77,300 full-time jobs in the cannabis industry in 2020, despite the ravaging pandemic. This represents a 32% year-over-year job growth, which is absolutely phenomenal considering 2020 was the worst year for U.S. economic growth since World War II.

Medical marijuana has been legalized in 37 US states, and there’s an adult-use market in 15 states and Washington D.C. According to the report:

Comparing the Cannabis Industry’s Growth to Other Industries

If you’ve learned anything from reading this article, it’s that the cannabis industry is booming. Therefore, job creation is, too.

Even the largest job growth, wind turbine techs, won’t achieve the same growth in 10 years as the cannabis industry already has in just four years!

The COVID Effect: How Cannabis Businesses Thrived During the Pandemic

When the coronavirus began to spread and reached other parts of the world, the cannabis industry was concerned (those of us at The Green Market Report included) that our space would take a massive hit. Most of us were bracing for impact, and waiting for the worst.

Surprisingly, the glorious opposite happened (for most.) Unfortunately, all industries have lost some businesses due to the pandemic, but cannabis businesses were deemed essential pretty much everywhere. Cannabis retailers responded beautifully, and innovative responses included:

It’s also amazing considering many retailers, like MedMen, faced unmanageable losses when rioters stole and destroyed their storefront during last summer’s protests. Many retailers were forced to start over, yet the industry continued to boom.

Cannabis employment also looks different during the days of COVID, as less employees are required and more people have to stay home for various COVID-related reasons. One business owner reported more staff turnover during 2020 than the last five years.

Massachusetts retailers sold $700 million worth of cannabis products in 2020, compared to $400 million in 2019 – even with Gov. Charlie Baker’s statewide shutdown temporarily halted all retail sales in April. Cannabis stores in Massachusetts still posted a 75% annual sales gain over 2019, despite the shutdown.

A lack of diversity is an issue that has been plaguing the cannabis space since legalization began, and according to this year’s report – we still have much work to do.

Very few states have public data relating to racial or gender diversity in the cannabis space, but Cannaclusive is doing just that. Cannaclusive’s database includes:

Some of the most troubling points for diversity in the cannabis industry:

Though this data is concerning, privately funded equity and incubator programs are answering the call to action and making more funds available to minority business owners.