10 States Have Introduced Proposals to Legalize Marijuana in 2021

Congress also appears ready to consider the decriminalization of marijuana at the federal level in 2021.

When voters in Colorado and Washington first approved legalized marijuana for adult use in 2012 the idea was seen as controversial by many. At that time, national polling from Gallup revealed less than half of Americans supported legalization.

Since 2012, when Colorado and Washington became the first states to legalize recreational marijuana, there has been a slow trickle of states that have followed suit. Over that period, Americans’ support for marijuana legalization has risen 20 points to a record-high 68%. This measure has enjoyed majority support from the public since 2013. Additionally, Gallup data from earlier this year find that 70% of U.S. adults now consider smoking marijuana to be morally acceptable, marking a five-percentage-point uptick in one year.

Today, more than two-in-three Americans support marijuana legalization, including 49 percent of respondents who self-identify as “conservative,” according to Gallup’s 2020 polling.  Even in a historically conservative state like Texas, nearly two-in-three respondents, 64 percent, supported legalizing and taxing marijuana in the 2021 Raise Your Hand Texas Foundation Poll.

In the span of eight short years, the number of states in the U.S. allowing adult-use marijuana has gone from zero to 15. Most of these efforts have happened via statewide ballot initiatives. 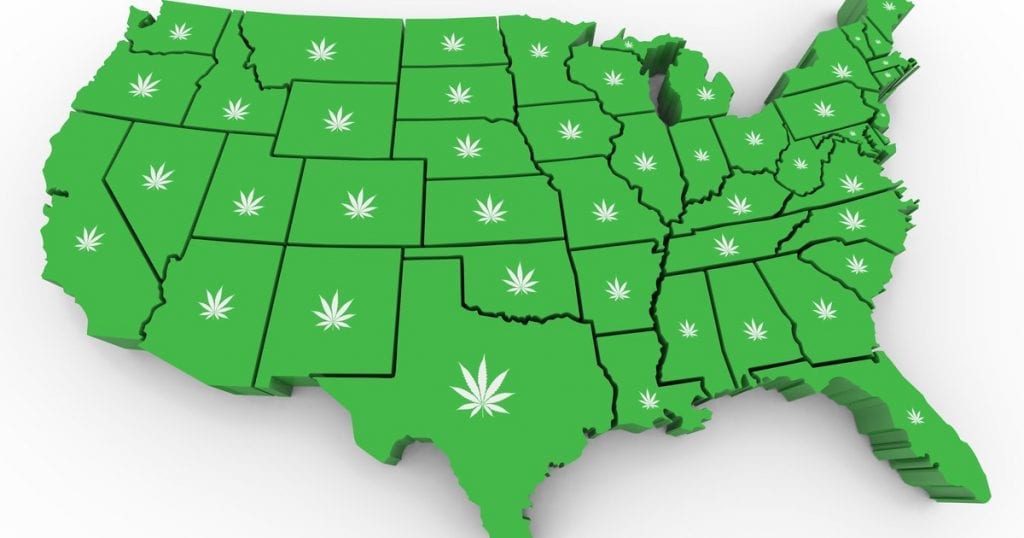 Now, lawmakers or governors in 10 states have proposed marijuana legalization during their respective 2021 legislative sessions.  This includes cannabis legalization proposals in Connecticut, Florida, New Mexico, New York, Maryland, Minnesota, Pennsylvania, Rhode Island, Texas, and Virginia.  If all those efforts are successful, nearly half of U.S. states would have legalized marijuana for adult use.

Similarly, Congress appears ready to consider the decriminalization of marijuana at the federal level this year.  After the House of Representatives voted in late 2020 to decriminalize marijuana through the Marijuana Opportunity Reinvestment and Expungement Act of 2019, or MORE Act, Senate leadership has now voiced similar support for marijuana reform.

On Feb. 1, Senate Majority Leader Chuck Schumer (D-NY) joined with Sens. Cory Booker (D-NJ) and Ron Wyden (D-OR) to call for an end to federal prohibition. In a written statement, the senators said:

The War on Drugs has been a war on people—particularly people of color.  Ending the federal marijuana prohibition is necessary to right the wrongs of this failed war…We are committed to working together to put forward and advance comprehensive cannabis reform legislation that will not only turn the page on this sad chapter in American history, but also undo the devastating consequences of these discriminatory policies.

It’s safe to say the states that have already legalized marijuana have dispelled many fears about a legal marijuana market and these experiences have helped change the minds of many Americans over a relatively short period of time.

Indeed, data from Colorado marijuana sales, which has tracked the effect of legalization on various social outcomes, has shown that many of the fears expressed by marijuana legalization opponents have proven unfounded.  Youth use in Colorado, for example, has not increased and has even seen a modest reduction as regulated legal markets have displaced uncontrolled black markets.

Likewise, rather than marijuana legalization leading to a rise in violent criminal activity, studies have shown that crimes against both persons and property have declined following legalization, although those results are not uniform across all states.

After marijuana legalization, states bordering Mexico, in particular, have witnessed sharp reductions in homicides and aggravated assaults while border seizures have similarly declined—indicating that legalization is successfully displacing the demand previously filled by illegal drug cartels.  Studies even find that home values have increased faster in jurisdictions that authorize legal marijuana sales than in jurisdictions that don’t.

In addition to the concerns of doomsayers failing to materialize, state economies have experienced positive impacts from marijuana legalization.  By early 2020, nearly a quarter-million Americans were employed full-time at legal marijuana businesses, making it the fastest-growing American industry.

Amidst the pandemic and recession, these economic factors are likely motivating efforts by state lawmakers to push through cannabis legalization legislation this year.  In Pennsylvania, Gov. Tom Wolfe has specifically called for marijuana legalization and taxation to help address the state’s budget woes following the government’s response to the coronavirus pandemic.  Similarly, New York Gov. Andrew Cuomo built his proposed state budget on the assumption of marijuana legalization.

According to state-by-state estimates from the Tax Foundation, every state could realize tens-of-millions or even hundreds-of-millions of dollars in tax revenues through legalizing marijuana news and collecting excise taxes.

Given the converging evidence of positive outcomes and experiences in the states that have already legalized, it’s very encouraging to see mainstream public support for marijuana legalization grow to such heights and lawmakers in so many states seeking to move beyond failed prohibition policies.